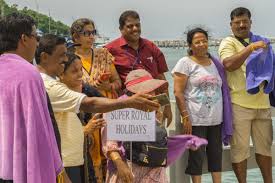 “India was upon a state with highest tourism rate. We had a lot of monopolies and attractions,” said Anil Sharma, director of Green Heaven Institute of Management and Research. Mr. Sharma was speaking to the members on tourism prospects in Vidarbha and was delivering a lecture arranged by Vidarbha Economic Development Council at its premises, on Saturday.

To quote Sharma who unhappily said, “Over the years, outward tourism has increased more than inward tourism in the country.” Citing statistics, he informed the gathering that India was ranking 12th on the Natural Tourist Resources Assets and 58th on the list of Tourists’ Preferred Countries despite possessing the highest number of natural resources.”

He congratulated the present BJP-led government which has taken powerful measures to expand tourism in its manifesto. He said,“The introduction of e-visa for tourists at approximately 150 countries has impacted tourism in a great way. Other initiatives like Swaccha Bharat Mission, Swadesh Darshan, Incredible India Investors Summit, Bharat Parv etc have really attracted more tourists in the country.”