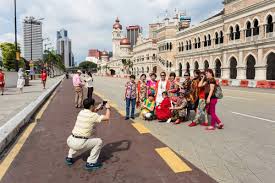 Idyllic beaches with gray stones on the coast of Queensland, Australia are now filled with lewd messages left by tourists and these are making locals disgusted with such behavior.

“Disgusting,” said one commenter, who also wanted backpackers to “leave our beaches and stop destroying them.” One called for punishment, and another placed the responsibility on tourists to clean the mess themselves.

“What is wrong with these people!! They should be made to come back and do it,” she said.
Worst and unrestrained behavior in the presence of the local population at an international destination isn’t something new. So widespread is the problem that across the world, dozens of tourist destinations have adopted pledge systems that are meant to keep tourists in check.

The themes of the pledges range based on location, but their basic rules are same: Treat the destination respectfully, don’t leave trash behind, stay on marked paths and sleep at official campsites. From Iceland to New Zealand, the pledges are designed to keep visitors safe and also to protect regional ecosystems that can be disrupted by throngs of travelers.

Overtourism is indeed a troubling phenomenon. With 1.4 billion tourists traveling the world in the past year alone, many destinations have decided to discourage tourism than attempting to accommodate the droves of visitors.

Destinations like the Faroe Islands, in the North Atlantic, have simply opted to shut down briefly for preservation reasons.

Smartphones have also added to the woes with tourists taking snaps randomly.

In Rome, new laws were implemented to control disruptive conduct and harmful behaviors after tourists were found bathing in fountains and historical monuments. At solemn historical sites like the Holocaust memorial in Berlin and the Auschwitz-Birkenau Memorial in Poland, backlash and public shaming on social media have increased along with the selfie-takers, who some historians say are not showing proper respect.