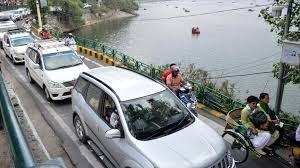 In an attempt to control the overflowing traffic of the previous weekend, police and administration stopped vehicles at various points outside Nainital and provided shuttle service to tourists to enter the city.

Though the administration managed the traffic well, the move resulted in leaving almost 30 to 40% hotels in the lake town empty.

Kamal Jagati, a member of executive committee of the hotel association said, “The police and administration have failed to find a long term and sustainable solution to this problem which is hurting the revenue of the tourism industry in the long run hurting local employment.”

Meanwhile, officials from the district police and administration said they were trying their best to manage the traffic overload which increases manifolds during the weekends in the peak tourist season.

Nainital additional district magistrate Harveer Singh said, “Shuttle facilities are being provided to the tourists. Vehicles are being parked at Rusi bypass at Haldwani-Nainital road and in Narayan Nagar at Nainital-Kaladhungi road to ease traffic congestion.”

Tourists to the lake town have been facing severe parking problems and bumper-to-bumper traffic on most days. The town has a parking space for only 2,000 four-wheelers. In contrast, 4,000 tourist cars arrive in Nainital every day in the peak season which lasts from May 1 to June 30. The number swells up to 6,000 vehicles on weekends.

Nainital has two open spaces, Flat Grounds and Metropol, which are used as public parking spaces, and a multi-storey parking in Sukhatal.

Despite Uttarakhand HC directing several measures nothing much has improved in the past few years. Earlier, in year 2018, Uttarakhand high court had ordered constitution of a mobile application which went online in October 2018 for booking parking spaces in public parking in Nainital town. The step was ordered to provide relief from chronic jams.