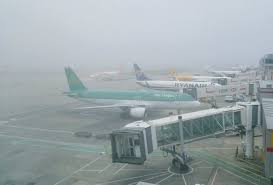 Thousands of airline passengers commuting to and from London’s  airports have their travel plans cancelled due to heavy fog.

The worst affected was London City Airport, in Docklands, during one of the busiest days. More than a dozen arrivals were cancelled and until 9.53 am no flights landed.

It was found that the KLM and Lufthansa flights from Amsterdam and Frankfurt respectively changed their directions in mid-air and returned to their departure airports.

For almost 20 minutes a Flybe flight from Dusseldorf off the coast of Essex and it then returned to German city. The passengers  had to wait for more than three hours on a flight.

Around 16 departures were cancelled, eight flights –seven on British Airways and one on Alitalia could take off . Several flights plying to Amsterdam, Dublin, Frankfurt and Luxembourg were affected.

More than 26 flights were cancelled at Gatwick and due to poor weather forecast easyJet grounded 10 flights of Friday on Thursday afternoon.

Those opting for Barcelona, Geneva, Amsterdam, Belfast and Toulouse route were informed  a day ahead.

Round trips from Gatwick to Basel, Copenhagen and Faro were cancelled too.

BA spokesperson  apologized the customers for the inconvenience caused and said that the travel plans were affected due to fog at London’s airports leading to a reduction in the number of aircraft which could have landed each hour.

The Air Traffic Control considering the safety had to allow greater space between each aircraft in low visibility which severely affected the airlines’ flight schedules.

BA was refunding or rebooking for the affected customers onto alternative flights for a smooth journey.