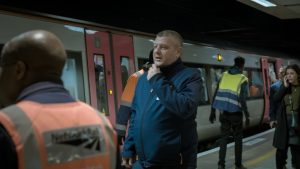 They feature in episode two of ‘The Station: Trouble on the Tracks,’ a behind-the-scenes series on the railway between Birmingham New Street and London Euston airing on ITV1 at 9pm on Thursday 19 March.

Other issues covered include overnight repairs to tracks in time for morning rush-hour after a train runs a red signal, the widespread impacts of an emergency evacuation of London Euston station and former bank worker-turned-train dispatcher, David Jarvis, coaching a new recruit.

Craig said: “We do our best every day to keep passengers moving safely. We expect the unexpected and continually adapt.”

Tim Shoveller, managing director for Network Rail’s North West and Central region, said: “Our goal is to give passengers a consistently reliable service. That’s what our people go to work to do come rain, wind, floods or shine.”

The documentary team spent six weeks filming on Network Rail’s Central and West Coast Main Line South routes in November and December last year. They captured footage in the busy run-up to Christmas, during extreme weather events and a period of industrial action.

Birmingham New Street became the focus for the series. ‘The Station: Trouble on the tracks’ is a three-part series showing at 9pm on ITV on March 12, March 19 and March 26.