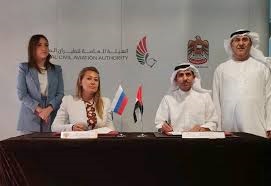 The UAE and Russia signed an agreement to increase air traffic to different cities within the two countries after a round of aviation talks at the Sheikh Zayed Air Navigation Centre in the capital, Abu Dhabi.

The two countries signed a preliminary agreement following the discussions and aim to hold talks in the first half of 2020 in St. Petersburg, Russia’s second biggest city after Moscow.

The agreement comes amid a visit by Vladimir Putin to the UAE on Tuesday with the Russian President paying his first official visit since 2007. Sheikh Mohamed bin Zayed, Crown Prince of Abu Dhabi and Deputy Supreme Commander of the Armed Forces, welcomed the Russian leader and will discuss co-operation and regional and international developments.

Russia is a key source market for tourism into the UAE. Russia climbed two places to sixth position as a source market of inbound tourism to Dubai with a 28 per cent uptick in the number of travellers to 678,000 last year, according to Dubai’s Department of Tourism and Commerce Marketing.