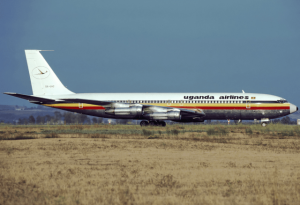 Uganda has received two aircrafts to revitalize its national airlines, Uganda Airlines, almost two decades after the national carrier collapsed. The two Bombardier CRJ900 jets were received at Entebbe airport on Tuesday, about 30 kilometres from Kampala. This new airline, Uganda Airlines will boost the travel, trade and communication in Africa and its neighbouring destinations.

Over the next three months, Uganda Airlines is scheduled to undergo a series of tests before its first commercial flights. According to Ephraim Bagenda, CEO of Uganda Airlines, the commercial operations will be launched in early July 2019. And we’re going to start with some liaisons. In the long term, Uganda Airlines wants to cover 21 destinations. Uganda’s President Yoweri Museveni has received two Bombardier CRJ900 jets from Canada at Entebbe International Airport.

In July, the Ugandan company’s fleet will be supplemented by two more Bombardier aircrafts, while Airbus will deliver two others by 2021. Uganda Airlines is emerging from a long hibernation after the company was liquidated in 2001 due to management and corruption problems.

Some local politicians have expressed fear that the same problems will resurface in the East African country.

Uganda has excellent wildlife watching destinations and welcoming locals. Uganda packs a lot into one small country. This country is the home to Africa’s tallest mountain range (the Rwenzoris), the source of the Nile, the world’s longest river and the continent’s largest lake.