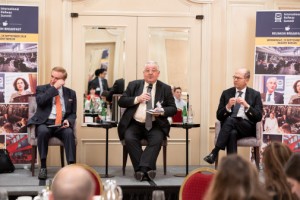 Participants from the past six editions of the International Railway Summit held over the last five years were invited to the networking event on the second morning of InnoTrans 2018, and enjoyed food, as well as food for thought, in the luxurious surroundings of the five-star Regent.

Among the past attendees of the International Railway Summit present at the breakfast were invited speakers Jean-Pierre Loubinoux, Director General of the International Union of Railways (UIC), and Philippe Citroën, Director General of the Association of the European Rail Industry (UNIFE), who both addressed the topic “Digital Railway: What is it?” with the help of moderator Simon Fletcher, Director Standardisation & Coordinator Europe, UIC.