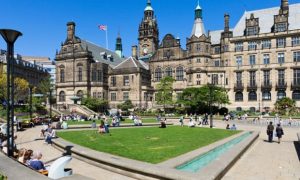 The temperatures will drop in the United Kingdom’s northern regions next week, while the south will enjoy some autumnal sunshine. The meteorological autumn officially begins on 1 September and usually sees colder spells develop across the country.

Lingering showers over southern areas will clear on Sunday night, but misty patches are likely to remain.

The cloudy conditions will cover much of Britain on Monday morning, before a band of rain pushes east.

But London and parts of the south east will see highs of 22degree Celsius. The Met Office expects conditions to be “mostly dry and bright” in the south and south east. But heavy rain will fall elsewhere, with wet and windy conditions likely in the North West.

Wednesday and Thursday will both see a mix of sunny spells in the south east and heavy showers in the north. The temperatures in the south will hit highs of 22C, but overnight lows in parts of the north could hit 2C.

However, there is likely to be a reasonable amount of dry and bright weather around, especially across southern parts of the UK, with the wettest conditions likely to be in the northwest.