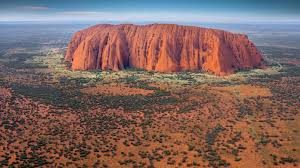 Before the sacred rock closes in Uluru in Australia, hundreds of tourists are flocking to climb it and are leaving ‘sickening’ amounts of rubbish in their wake.

Human waste, nappies and rubbish have been left by visitors on the attractions in the northern Territory’s Red Centre. The climbing ban will be effective from 26 October.

The upcoming ban was announced in 2017 and since them the number of climbers has skyrocketed from around 149 each day to between 300-500 daily visitors.

There is a long line of people snaking up the rock  as shown in a picture shared by the local residents. According to the local residents it was the busiest they have seen, there were cars parked from 1km on either side of the road leading up to the car park at the base.

Spokesperson from the Darug Custodian Aboriginal Corporation said that it made him sick to look at the  photo and the disrespect and disregard shown for the traditional owners’ wishes.

Apart from people climbing they defecate, urinate, discard nappies and rubbish on it.

He said that he could not wait for the climb to be permanently closed and their sacred lore, culture and traditions to be acknowledged and respected.

Stephen Schwer, chief executive of Tourism Central Australia commented that when there is the kind of influx of drive travel as they saw at the moment, there is an influx of waste.

The owner of the cattle ranch and campsite Curtin Springs Station which is  about 100km away, Lindy Severin said that the rubbish was everywhere including the used toilet paper.

Thousands of campervans heading to Uluru had been dumping toilet tanks on the roadside. To the Aboriginal Australians the massive sandstone monolith also known as the Ayers Rock  is sacred and they had earlier campaigned to stop people climbing it.

There was a sign at the bottom of the path which read as – We, the traditional Anangu owners have this to say. The climb is not prohibited but we ask you to respect our law and culture by not climbing Uluru.

They had the responsibility to teach and safeguard visitors to their land .

The climb might be dangerous and many people died while attempting to climb Uluru.

In 2017, the Uluru-Kata Tjuta National Park announced that tourists would be banned from climbing the rock from October 26, 2019, after 12-strong board voted unanimously to introduce the measure.

Chairman and senior traditional owner Sammy Wilson at the time said that it is an extremely important place, not a playground or theme park like Disneyland.

They travel to another country and there is a sacred site with an area of restricted access. He doesn’t enter or climb it and it is for the same in Anangu they welcomed tourist there are not not stopping tourism, just the activity.