US based Delta Airlines deferred the Japan-Guam flights 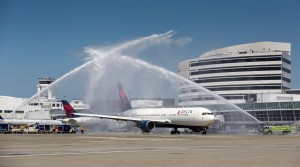 Due to the lowering of the international and diplomatic relationship between USA and North Korea which has elated in the current times, most of the business travellers and the tourists are avoiding to go to Guam, so that Delta Air Lines has announced it will end flights between Japan and Guam.

The demand from USA and Japan has lowered down, which was not strong enough for Delta Airlines to maintain the route and the last flight will take place in January.

After ending the flight services in Guam, United Airlines is the only U.S. airline with flights between Guam and Japan. Japan Airlines also has flights from Narita airport to Guam.

The decision of Delta came after HK Express delayed their Japan-Guam flights until next summer, expression the geopolitical concerns in the region.

North Korea’s supremo Kim Jong Un has threatened Guam to obliterate the small island. The country has fired two missiles over Japan including one launched on Friday.

Guam Tourism Bureau said that with this political tension, Guam, known as the Golfer’s paradise in the Asia, has lost about $9.5 million in tourism sector spending in August because of the threats.

There were more than 7,000 cancellations of tours, school groups and business ventures mostly from Japan. A planned October China Air charter flight to Guam from Taiwan was also cancelled because of the cancellation from the customers, especially from Japan, were wary about making the trip.