US sees a decline in foreign visitors in 2017 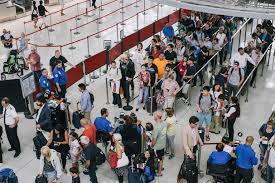 Foreign visitors to the United States declined in 2017. They spent less money while in the country too.

Data shows that, at $187.6 billion, the amount of money spent in the U.S. from January through November by tourists from abroad decreased by 3.3 percent as compared to the same time period the year before. This indicates a loss of $4.6 billion in travel-related spending for U.S. businesses, which were projected to lose $1.3 billion in travel-related spending from Europe and the Middle East alone, according to a report by the Global Business Travel Association.

The U.S. Travel Association (USTA) is launching a “Visit U.S.” coalition next week, through which multiple travel-related industries will communicate to the current administration the importance of reversing this decline in international travel and offering suggestions for how to do so.

USTA’s website says that there were 1.7 million fewer international visitors to the U.S. in the first seven months of 2017 as compared to those same months in 2016, and as a result, 40,800 jobs are at risk. Majority of these are in the hotel and food-service industries, where foreign tourism is often essential.

“Flourishing international travel is vital to President Trump’s economic goal of sustained 3 percent GDP growth, and the Visit U.S. coalition is being founded for the express purpose of helping him achieve it,” said U.S. Travel Association president and CEO Roger Dow.

Dow feels that the United States needs to take more care with regard to its tourism industry.