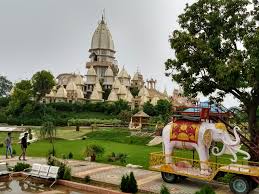 Uttar Pradesh is set to focus on the development of Hastinapur in Meerut district. While the Regional Tourism Department in Meerut has been tasked to prepare a development plan for Hastinapur, which would include refurbished or new roads and more civic amenities to boost tourism, it would also include the restoration of some of the ancient temples in the region and surrounding areas.

Sources said that Chief Minister Yogi Adityanath, who is likely to start his Ganga Yatra from Bijnor on January 27, may visit Hastinapur, where he could take part in “Ganga Arti” and address a public meeting.

“Uttar Pradesh has a rich heritage of ancient places associated with the Ramayan and Mahabharat era that has a huge potential to become tourist destinations. I have asked senior officials of the Tourism Department to prepare a detailed project report for the developing Hastinapur in Meerut and also take help of professional architects if required,” he added. The project has been initiated on the instructions of Chief Minister Yogi Adityanath and work has already started on preparing a detailed project report, said a senior official of the department.

Anju Chaudhary, Regional Tourism Officer, Meerut, who has been tasked with the preparation of the development plan for Hastinapur said the idea is to boost tourism. “While there is Pandav Teela in Hastinapur, which is a protected site under the Archeological Survey of India and as a result, we cannot undertake any construction surrounding it, we would, therefore, develop other amenities surrounding it. There are several historical temples like that of Draupadi, Shiva and also famous Jain temples, which get tourist footfalls but not in large numbers.”

“With the help of the Archeological Survey of India, we are gathering historical information about different places and structures in Hastinapur and our plan would include having detailed signages across the city giving historical details of each structure apart from proposing development of civic amenities in the city from the point of tourism,” said Chaudhary, adding that she would try to submit the project plan “as soon as possible”.