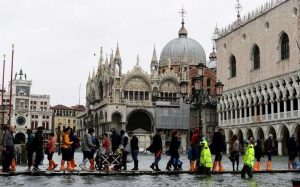 About 70 per cent of Venice is underwater as per a news channel. The high tide reached a maximum of over five feet above the sea level. It is considered the fourth-highest level ever recorded and the highest since 2008. Acqua alta rose to 156 c.m. (61 inches) by early afternoon.

As strong winds lash the city and heavy rains pour over Venice, the tourists are being turned away from flooded places like St. Mark’s Square.

Citizens and tourists alike were seen walking on the elevated wooden platforms, or wade through water without shoes.

Most popular tourist attractions across Venice were temporarily closed. Some tourists are reportedly stranded and awaiting rescue. Tourist attractions, offices, schools, and water bus system have been shut in several regions in Italy. About 10 people have been killed as per the reports.

Authorities have asked the tourists and citizens to avoid the flooded streets. If it is necessary to venture out, then they can wear high boots.

Heavy rain and winds have caused havoc in Venice, flooding the popular tourist destination and killing at least 10 people across the region.

During the Venice Marathon, runners had to tread the flooded routes.

The UK Foreign and Commonwealth Office (FCO) has now updated their travel advice to the region. Bad weather is expected to persist for the whole week.