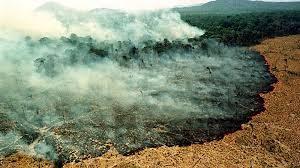 Huge fires have been blazing through the Brazilian rainforest this week, with more than half in the Amazon Equatorial Forest Zone. This powerful fires spell disaster for the local environment and ecology — and environmentalists and researchers say the blazes were likely lit by cattle ranchers and loggers. French president, Emmanuel Macron, has said this massive fires in the Amazon are an “international crisis” and called for them to be top of the agenda at the G7 summit, prompting a furious response from Brazil’s leader.

A growing number of worldwide celebrities are among those speaking out about the potential global catastrophe. Many are demanding accountability from Brazil’s pro-business President Jair Bolsonaro, who activists say encouraged ranchers, farmers and loggers to exploit and burn the rainforest. But the President has said he’s not responsible for the fires. That hasn’t impressed celebrities, who have taken to social media to ask the President to do more.

French President Emmanuel Macron and United Nations Secretary General António Guterres both took to the social media to express concern about the fires that have reached a record number this year, devastating vast swathes of forest considered a vital bulwark against climate change. The fires in the Amazon have surged 83 per cent so far this year compared with the same period a year earlier.  Although fires are a regular and natural occurrence during the dry season at this time of year, environmentalists blamed the sharp rise on farmers setting the forest alight to clear land for pasture.

The farmers may have had at least tacit encouragement from the firebrand right-wing president, who took power in January. Bolsonaro has repeatedly said he believes Brazil should open the Amazon up to business interests, to allow mining, agricultural and logging companies to exploit its natural resources.

The wildfires raging in the Amazon rainforest have hit a record number this year, with 72,843 fires detected so far by Brazil’s space research centre INPE, as concerns grow over right-wing president Jair Bolsonaro’s environmental policy.

The surge marks an 83 per cent increase over the same period of 2018, the agency said on Tuesday, and is the highest since records began in 2013.

The images show the northernmost state of Roraima covered in dark smoke. Amazonas declared an emergency in the south of the state and in its capital Manaus on August 9th. Acre, on the border with Peru, has been on environmental alert since Friday due to the fires.

Wildfires have increased in Mato Grosso and Para, two states where Brazil’s agricultural frontier has pushed into the Amazon basin and spurred deforestation. Wildfires are common in the dry season, but are also deliberately set by farmers illegally deforesting land for cattle ranching.

The unprecedented surge in wildfires has occurred since Mr Bolsonaro took office in January vowing to develop the Amazon region for farming and mining, ignoring international concern over increased deforestation.