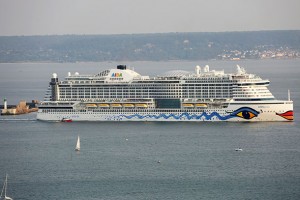 Cruise passengers were stuck down in droves by a sickness bug during a luxury Mediterranean voyage.
Around 300 passengers on the cruise ship Aida Prima were left suffering from the suspected virus.
There were cases of vomiting and diarrhoea throughout the Aida Cruises ship after it departed Palma in Majorca, Spain on 22 September.
The vessel was due to visit Corsica, Rome, Florence and Barcelona but had to turn back to Majorca when passengers began suffering from gastroenteritis.
The mass illness left on-board doctors unable to cope and caused them to order afflicted cruisers to stay in their cabins.
The German cruise company were forced to call in medical personnel to help, who arrived from Berlin by plane.
A leading Spanish newspaper reported that ill passengers had to queue for three hours to give officials details on their illness.
They then allegedly had to wait for five hours for the doctor to come to their cabin, only for the medical professional to stay just a few minutes.
Staff are said to have distributed leaflets with hygiene advice while sick passengers were brought bread and water in their cabins.
The ship docked back at Palma earlier than planned. To prevent the disease from spreading, passengers were taken by bus to a farm on the outskirts of the city to wait for flights back to Germany.
However, some guests refused to wait and took the first flights available they could to get home.
Aida Cruises told a German newspaper that despite the high hygiene measures that apply on board, there were cases of gastroenteritis among passengers.