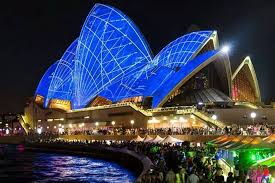 The three weeks of features on Channel 7’s Weekender travel program in Queensland, South Australia and NSW is being used as a vehicle to attract interstate and intrastate travellers to visit the Harbour City during the acclaimed Vivid Sydney festival.

Minister for Jobs, Investment, Tourism and Western Sydney Stuart Ayres said this extensive profiling of Australia’s largest event would be invaluable in driving visitation to Sydney in Winter.

“Hundreds of thousands of viewers across Queensland, South Australia and New South Wales will enjoy an exclusive sneak peek at what’s in store for Vivid Sydney 2019 and help them to plan their itineraries to visit during the festival,” Ayres said.

“Channel 7’s Weekender programs inspire avid travelers to explore new territories or reimagine favourite destinations, and for people who have visited Vivid Sydney before or are considering their first Vivid Sydney experience this three-part feature will provide invaluable intel.

“Now is the perfect time for visitors to start

planning their itineraries, securing accommodation and mapping out their Vivid Sydney week or weekends.”

The first segment will focus on Vivid Light including an interview with several artists that are contributing to this year’s Light Walk. Over 50 works from 100 artists/collaborators will make up the three-kilometer Light Walk.

Next up will be a tour of the city’s unexpected music venues including Ziggy’s Barber Salon and The Dock, and finally one of Sydney’s premier precincts Barangaroo will showcase the interactive installations and food and beverage offerings that will be available to guests during Vivid Sydney.

Vivid Sydney will take place from Friday 24 May to Saturday 15 June in Sydney.