Walking in Nature: Paparoa Track, a World of its Own 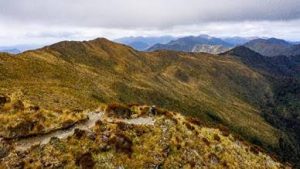 After 25 long years, the tenth Great Walk to be constructed in stone cliffs, beech forest and glades of subtropical nīkau palms at one end, on the climb to a unique alpine setting with incredible views out to the Tasman Sea. The Paparoa Track is of significant meaning to the locals and will act as a tribute to the 29 Pike River miners who lost their lives in the 2010 disaster.

The West Coast community has been preparing to welcome visitors to their precious part of the world since the announcement of the track in 2017.

Locals, or ‘Coasters’ as they are colloquially known, are well known for their hospitality and extremely passionate about their home.

The West Coast is home to the spectacular Haast World Heritage Area, five of New Zealand’s 14 national parks and five marine reserves. Conservation and sustainability are important to the West Coast, where 86 per cent of the land is administered by the Department of Conservation (DOC).

The Paparoa Track will be officially opened in an event in Blackball on 30 November 2019 before the first walkers and bikers take the maiden trip on December 1. Due to a recent land slip in the middle section of the track, the Great Walk will only partially be opened until at least December 22. Walkers can still reach the Moonlight Tops hut from the east or the Pororari Hut from the west.  More information here.

On commenting about the newly launched track, Hamish Seaton, Track Router – MTB Specialist, “I don’t think any other track in the country has had such a high focus on minimising impact and then remediating around the track.  Within each build crew there has been at least one person dedicated to remediation, so the track is wrapped up and bedded in as soon as it’s built.  Six months later the track looks like it’s been there for years.  This environmental focus is now rubbing off on other trail projects around the country.”

Fun Facts about the track: