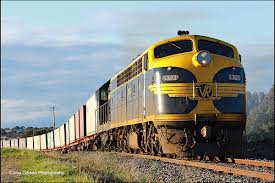 A new $10 million rail crossing loop on the Warrnambool line at Warncoort, Victoria, Australia will make it easier to operate passenger and freight trains between Marshall and Warrnambool, Victoria Minister for Public Transport and Member for Polwarth Terry Mulder said on February 15.
Mr Mulder inspected the site of the new Warncoort passing loop to see the works underway.
“The previous Labor Government ripped up a crossing loop at Winchelsea. In contrast, the Victorian Coalition Government is fulfilling our election commitment to build a new 1,200 metre long crossing loop at Warncoort (between Birregurra and Colac) to allow trains to pass one another,” Mr Mulder said.
“With the shorter crossing loop at Camperdown to remain open, this will make it easier to operate trains on the Warrnambool line.”
Mr Mulder said that the Warrnambool freight trains, operating five nights a week, kept 280 trucks a week off the Princes Highway West, while also lowering farmers’ and exporters’ costs.
“When it opens at the end of 2013, the new Warncoort crossing loop will complement the recently upgraded Warrnambool intermodal terminal. Rail freight is not just efficient but environmentally friendly,” Mr Mulder said.
“The new crossing loop should allow freight trains to become longer and heavier, depending on demand. Late running freight trains are less likely to have to sit at North Geelong for hours waiting for a clear run on the largely single track Warrnambool line.”
“The number of passengers using V/Line’s Warrnambool trains rose by almost 10 per cent in 2012 to about 480,000. It’s great to see local residents and visitors taking advantage of good value V/Line fares such as its Family Traveller that allows an adult or concession traveller to bring along two children free of charge.
“The Warncoort crossing loop is a further step in therevitalisation of rail that is occurring under the Coalition Government,” Mr Mulder said.