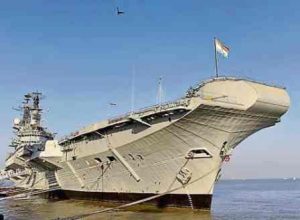 The Central government has given ‘in-principle’ approval to the Maharashtra government’s proposal for converting decommissioned warship INS Viraat into a museum or hotel, Defence Minister Nirmala Sitharaman said on December 31.

In a written response to a question in the Rajya Sabha on whether the Maharashtra government has put forth the said proposal before the defence ministry, Sitharaman replied in the affirmative. INS Viraat was decommissioned last year after 30 years with the Indian Navy.

The aircraft carrier, in its earlier avatar, had won the Falklands War against Argentina in 1982 for the Royal British Navy. It weighs about 27,800 tonnes and served in the British Navy as HMS Hermes from November 1959 to April 1984. After refurbishment, it was commissioned into the Indian Navy, which purchased it at the cost of $65 million. It was recommissioned on May 12, 1987. Responding to a question on allowances to non-commissioned officers, Sitharaman said the 7th Central Pay Commission (CPC) had considered all aspects with regard to applicability of military service pay (MSP), including the rates while making its recommendations.