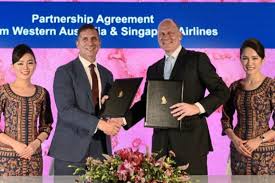 In a bid to promote Western Australia (WA) as a desirable holiday destination to people across the globe, a three-year global co-operative marketing agreement has been signed between WA State Government and Singapore Airlines.

It is hoped the combined campaign activity in Singapore will generate more than 11,000 visitors, providing a further boost to the WA economy to help create new jobs.

WA Tourism Minister Paul Papalia said, &quot;I’m delighted to be here in
Singapore to officially sign this exciting marketing agreement with one of the world’s greatest airlines, Singapore Airlines.”

The campaigns will include promotional airfares and travel packages to WA, and will be promoted through a range of digital, print and television advertising.

Singapore Airlines, which has worked in partnership with Tourism WA for the past 20 years, will promote affordable fares to Western Australia in those key international markets.

&quot;Our partnership with Singapore Airlines, which dates back to 1999, will be extremely important in attracting more people to Western Australia, from all across the globe,” the Minister said.

This agreement forms part of the $12 million international marketing boost announced by Premier Mark McGowan and Papalia in March to grow the number of people visiting WA from overseas.