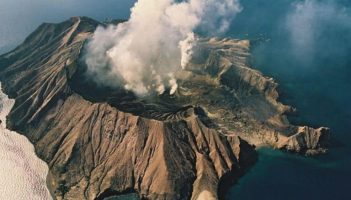 The level-two warning has been issued in the White Island due to the increase in volcanic activity.

The level-two warning means moderate to heightened volcanic unrest. The highest level on the scale is five, which is given only during a massive volcanic eruption.

The authorities say that the level of volcanic tremor has also gone up from weak to moderate strength in the past few weeks.

The higher alert level comes following an increase in the amount of SO2 gas coming from the island.

The SO2 gas emanating from magma (molten rocks) at depth and the longer-term data from the past few months hints a possible increase in gas passing through the volcano from depth.

The volcano’s Crater Lake has been slowly increasing since August, with a weak geyser-type activity found at the edge of the lake.

However, other measurements made on the island do not hint at any significant changes.

The current seismic activity is quite similar to the seismic activity found between  2001 to 2016 and it points out that White Island may be entering a period where the eruption is more likely than normal.

White Island is said to be volcanically active at least since it was first discovered by James Cook in 1769. Sulphur mining was attempted on the island but abandoned after some time.

Recent observations can be explained by the increased gas flux which results in geysering and lake level changes.

GNS Science and the National Geohazards Monitoring Centre is continuously monitoring White Island for further signs of activity. Volcanic Alert Level Two is issued when there is a possibility of unrest hazards on the volcano and could include eruptions of steam, gas, mud and rocks. These eruptions could occur with little or no warning.