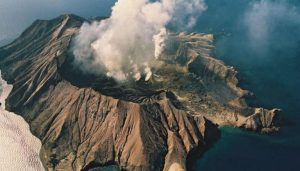 The New Zealand Police have launched an investigation into the deaths of at least five people in a volcanic eruption in White Island. The officers launched the probe after an explosion on White Island killed five, left 31 injured and eight others missing and presumed dead on Monday.

There were no more signs of life on the volcanic island, also known as Whakaari, top officials said. More than two dozen of the injured have suffered massive burns across up to 71 per cent of their bodies and could yet die of their injuries, said Peter Watson, the government’s chief medical officer.

The police said 47 people were on the uninhabited island at the time of the eruption – 24 from Australia, nine from the United States, five from New Zealand, four from Germany, two each from China and the UK and one from Malaysia.

Jacinda Ardern, the prime minister, told New Zealand’s parliament that the scale of this tragedy is devastating.

Police officers are now preparing to conduct drone flights over Whakaari to scout the island in advance of manned landings. They understand people’s desire to recover their loved ones and we are working around the clock to get onto the island so we can recover them as soon as possible, a statement read.

Officers added that at this time police are investigating the death of the individuals on Whakaari/White Island on behalf of the coroner.

WorkSafe New Zealand has opened a health and safety investigation into the harm and loss of life caused by the eruption.

As the workplace health and safety regulator and administrator of the adventure activities regulations, WorkSafe will be investigating and considering all of the relevant work health and safety issues surrounding this tragic event.

Ms Ardern has said the government will also investigate how tourist excursions were allowed to take place to the volcano, as geologists said “heightened activity” had been observed on Whakaari recently.

Drexel University volcanologist Loyc Vanderkluysen ​said on that they have to say that she is very surprised to hear there were visitors there today, because scientists seem to have been well aware that White Island was entering a phase of heightened activity.