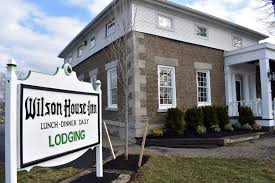 The Wilson community will gather at 7 p.m. Tuesday at the newly revamped Wilson House Restaurant and Inn to jump start tourist season with a national tourism advocate.

Peter Pantuso, president and CEO of the American Bus Association in Washington, D.C., will be the keynote speaker.

Wilson Village Mayor Arthur Lawson said that Peter Pantuso is one of the most active tourism advocates in Washington. He represents 800 privately owned bus companies in the U.S. And this represents 65 percent of the bus transportation industry in our country.

Lawson said that they have the largest freshwater natural harbor on the south side of Lake Ontario here in Wilson, four very good restaurants, wineries on the Niagara Wine Trail, a brewery (Woodcock Brothers Brewing Co.) and the Seaway Trail.

Lawson noted that officials from Destination Niagara USA and VisitRochester will attend.

Urban tourism uses big, national chains, but rural tourism is about small, family-owned businesses and this is the growing trend in the tourism industry.

The restaurant is a fitting site for a tourism celebration, as the 1844 icon reopened last month after extensive renovations to preserve its historical integrity. It has long been a popular tourist destination.