Winter storm to pour snow on parts of US, disrupt travel plans 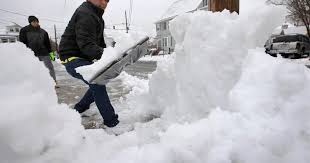 A major winter storm is forecast to develop early Friday in the Plains and travel rapidly east through the weekend, delivering a blast of snow and ice.

As of Friday morning, nearly 90 million people across the country were under some kind of winter storm warning, advisory or watch, meteorologist Monica Garrett said.

Places from Oklahoma to Maine could see snow, freezing rain and sleet.

Ice prompted a temporary closure at Kansas City International Airport in Missouri, where a plane slid off the pavement, an airport spokesman said. There were no known injuries.

In Guymon, Oklahoma, the ice was so slick that resident Kassidy Stroup couldn’t stand up in her driveway. She shared a video of her futile struggle to open the door to her truck as she slid this way and that on the icy path.

A swath of locally heavy snow, sleet and freezing rain is expected for portions of the Central Plains northeast through the Upper Midwest, resulting in arduous travel.

The Midwest could experience the highest snowfall totals. Minnesota, portions of Iowa, Michigan, Wisconsin and northern New England could see eight to 12 inches of snow.

These areas could experience blowing snow due to the high winds, which will cause near-whiteout conditions on roadways.

The Rockies could see heavy snow, with wind gusts of up to 75 mph at lower elevations in the High Plains.

Air travel in the Midwest will most likely experience long delays and roads will be treacherous.

Additional snow and ice accumulations will be possible into Sunday for interior portions of the Northeast and New England, with coastal areas first getting snow, then rain.

New York City and Boston will get in the mix with snow in the morning. Amounts will be small: about 1 to 2 inches possible in New York, while Boston may see even less. The snow will change over to rain in the evening, and it will rain overnight.

After the storm moves out, the bitter cold will settle in. High temperatures in the region will remain in the single digits Sunday and into the early part of next week, while overnight temperatures will dip to 10 to 20 degrees below zero.

Tags: Winter storm to pour snow on parts of US