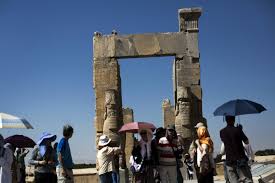 For Chinese travelers, Iran will waive visas from the end of July in a bid to perk up the economy, faltering under the weight of US sanctions.

Tourism officials have stated that they expect to draw roughly two million Chinese every year to Iran, a huge increase from the 52,000 Chinese visiting last year.

Tapping into the tourism market of China could pay off in the long run. China has the most outbound tourists in the world. In 2018, the Chinese comprised 150 million trips abroad, spending an enormous £233 billion overseas. And those numbers are anticipated to grow as more Chinese apply for passports. At present, only nine per cent of the 1.4 billion people of the country hold passports.

The economy of Iran has been going toward recession after the US reimposed sanctions on November 2018, heavily aiming vital oil exports and international financial transactions.

The GDP of the country is anticipated to drop by 6 per cent this year, a further slide from last year’s 3.9 per cent reduction; inflation could reach 40 percent, according to the International Monetary Fund.

In a reaction, Tehran is keen on other ways to boost up the government’s non-oil revenues. Tourism is seen as an “unsanctionable” sector,” tourism board chief Ali Asghar Mounesan told IRNA, a state media agency, in June.

In an earlier move to support tourism, Iran declared on August 2018 that it would no longer stamp visitors’ passports, allowing some to bypass a US entry ban on travellers who have visited the country.

China, one of the remaining partners in the nuclear deal that the US withdrew from last year, has openly defied the sanctions and continued to buy Iranian oil.