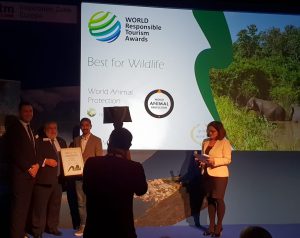 World Animal Protection has secured gold place at the WTM World Responsible Tourism awards for their global campaign to end wildlife used for cruel tourist entertainment. The award is in the Best Wildlife Conservation category and was presented to them by BBC presenter, Tanya Beckett.

Launched in 2015, the organization’s Wildlife Not Entertainers campaign is moving the wildlife tourism industry away from cruel forms of entertainment towards positive wildlife experiences where tourists can see wild animals in the wild or true sanctuaries.

Nick Stewart, Head of Wildlife Not Entertainers at World Animal Protection said that they are delighted to win this award. Our campaign gives a voice to the 550,000 wild animals that are currently in captivity and being abused for the sake of so-called tourist entertainment.

“Our work is being recognised – we have witnessed a ripple effect of travel companies pulling out of elephant riding, helping us engage with elephant camps to transition their business to become elephant-friendly (observation only). This shift is essential to drive real change to protect wild animals.”

More than 550,000 captive wild animals worldwide, including elephants, sloths, tigers and dolphins endure appalling cruelty for tourist entertainment[i]. For most wild animals, the cruelty involves being snatched from the wild; ‘trained’ with beatings, living in severely inadequate conditions, being chained and isolated. These wild animals are forced to have contact with people, often causing them psychological trauma.

It is not just wildlife that suffers. There are also major health and safety risks to tourists participating in wild animal attractions –  In Thailand alone,17 fatalities and 21 serious injuries were reported in venues with captive elephants in Thailand between 2010 and 2016.

There is a growing movement demanding wild animals are no longer used in entertainment. Over 1.6 million people and over 200 tour companies have signed World Animal Protection’s animal friendly travel pledge, and travel companies committing to stop selling or promoting venues that offer elephant rides and shows. This signals there is a demand to phase out cruel wildlife attractions, like elephant riding, dolphinariums, and tiger selfies.