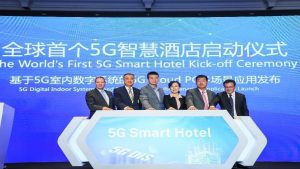 The world’s first 5G smart hotel in China by Inter Continental Shenzhen has opened the door for digital transformation for the entire hotel industry and will provide the guests with the ultimate innovative luxury experience. Guests will be guided by robots to their rooms and chat with them in the elevator.

Today a strategic cooperation agreement was signed by Inter Continental Shenzhen, Shenzhen Telecom, and Huawei to create the world’s first 5G smart hotel in China. It will have the first end-to-end 5G network along with integrated terminals and cloud applications, virtual reality, gaming, everything is connected to the cloud.
Visitors could get a glimpse of the future of hotel business when China’s Huawei Technologies unveiled the world’s first 5G hotel in Shenzhen.

After the launch of the world’s first 5G railway station in Shanghai a month ago it was another step for the major Chinese carrier and the largest telecom equipment provider in deploying the next generation of mobile technology.

Zhou Yuefeng, chief marketing officer of Huawei’s wireless network product line, said at the launch event that they would like to fully embrace 5G technologies by using them in airports, train stations, hotels and so on. And it is set to boost bandwidth, which also brings more opportunities for the telecom industry.

It has been forecasted by the Shenzhen-based firm that by 2025, the world will have 2.8 billion 5G users.

Will Townsend, senior analyst at US-based Moor Insights and Strategy mentioned that Huawei has consistently been at the forefront of 5G with both pre-standard and now new radio (NR)-based use cases for smart city deployment.

He went on saying that transportation, public safety, healthcare, smart manufacturing and hospitality should rise to the top as initial applications.

In the second half of 2019 the industry will see a wide range of 5G services officially as China is still testing 5G technologies and more than 60 carriers worldwide releasing 5G business and services.

Cui Kai, an industry analyst at International Data Corp said that they were moving in the right direction, as both carriers and equipment providers have been aware of the significant value in 5G, which will encourage them to tap into more scenarios.