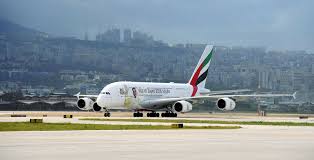 The world’s largest passenger jet has landed at Beirut’s international airport, and it is a hope for a sustained revival to Lebanon’s tourism and travel sectors.

The one-off Emirates Airbus A380 flight from Dubai is a good initiation for substantial passenger traffic between Lebanon and Gulf nations, where many Lebanese nationals work, as well as go to other countries and regions.

Emirates said it scheduled the flight, which is the first of its kind to carry paying passengers to Beirut, to see if the airport was ready to handle regular A380 service.
Lebanese tourism officials are hoping for positive results.

There are nine flights daily from Dubai to Beirut, on three different carriers.

Tourism is one of the key pillars of Lebanon’s economy, contributing to 19 per cent of the country’s GDP, according to the WTTC.

However, Beirut’s Rafik Hariri International Airport, Lebanon’s only commercial airfield is quite out-of-date and lines at security stretches for hours during the summer months.
The airport is designed to handle six million passengers annually. In 2017, it saw over eight million. Its gate areas are grimy and gloomy, which are a poor reflection of politicians’ outsized ambitions for the national tourism industry.