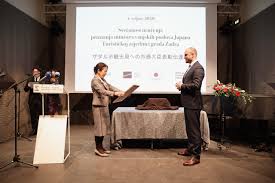 The Zadar Tourist Board has received lots of appreciation from the Japanese Foreign Minister in regards to the contribution to advance relations between Croatia and Japan through the “Tuna, Sushi & Wine Festival” project, which has been aranged in Zadar since 2015.

The Japanese Ambassador to Croatia on Tuesday, Her Excellency Misako Kaji, presented the director of the Zadar Tourist Board, Mario Paleka, with the honour at a ceremony at Rector’s Palace in Zadar.

Prior to the presentation, a short documentary about the “Tuna, Sushi & Wine Festival” was screened, summing up all festival events in the last five years.

In her address, Ambassador Kaji highlighted that this appreciation made by the Japanese Foreign Minister is given to individuals as well as organizations regarding their contribution to the advancement of Japan and other countries. Kaji called the “Tuna, Sushi & Wine Festival” a “distinctive sign of the Zadar Spring” and emphasised:

“Tuna from Croatia is very well received and appreciated in Japan as a valuable ingredient in sushi, accounting for half of Croatia’s exports to Japan, and the festival brought Japan and Croatia closer to Zadar, bringing the Japanese culture closer to these areas. That is why I believe that the “Tuna, Sushi & Wine Festival” will continue to be organised in Zadar”she said, adding further that few Croatian wines also have found their position in the Japanese market, credit goes to the festival.

Paleka said: “This recognition confirms the importance and value of the Festival and the efforts of the Zadar Tourist Board. The basic prerequisite for the development of such a project is cooperation at all levels, from local to national and international. The festival, among other things, was a finalist last year in the selection for the Tourism Event of the Year at the Days of Croatian Tourism, all of which confirms the long-term thinking of my predecessors Messrs. Supa and Rados to create, expand and enhance the festival.”

Among many others, the award ceremony was attended by Ines Stranja, Member of Parliament and President of the Inter-Parliamentary Croatian-Japanese Friendship Group; Head of Sector for Eurasia, Eastern Partnership, Asia and Oceania at the Ministry of Foreign and European Affairs Drazen Margeta; Ivan Vodopivec, Honorary Consul of Japan in Split; Zadar Mayor Branko Dukic; Zadar Chamber of Commerce President Dario Jurin; president and CEO of “Kali Tuna” Jiro Kamba; Director of the Zadar County Tourist Board Mihaela Kadija and representatives of other Zadar tuna companies.