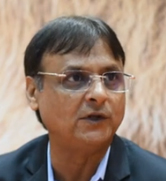 Travel and Tour World caught up with Jawahar Chavda, Minister
(Tourism and Fisheries), Government of Gujarat, at WTM London, to know what Gujarat can offer to travelers from around the world.

Gujarat has many prehistoric sites which are over 4000 years old. A dinosaur’s park has been recently opened, which is the third-largest park in the world. The park houses the fossilized remains and eggs of the dinosaurs.

Sardar Vallabhbhai Bhai Patel’s statue, which has been put up a year ago, is the world’s tallest statue at 182 metres. It is double the size of the Statue of Liberty. It’s a dream project of Prime Minister Narendra Modi. The site has received over 3 million visitors within last one year.