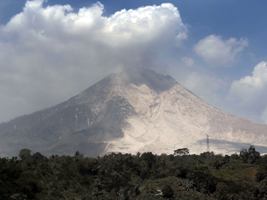 A mass evacuation is happening in the Philippines’ capital city Manila, where an erupting volcano 40 miles (65 kilometers) south of the capital has triggered some 75 earthquakes and spewed “ballistic fragments,” forcing financial markets to hang- up trading and Manila airport to close.

The Philippine Institute of Volcanology and Seismology said that the hazardous explosive eruption is possible within hours to days. More than 23,000 people have been evacuated since late Sunday, with plans to move as many as 200,000 people. The officials ordered schools and government offices shut, and advised private businesses to do the same. The weak lava fountaining, accompanied by thunder and flashes of lightning, indicated intense activity at the main crater of the Taal Volcano, the volcanology agency said. The dozens of towns and urban areas all the way to Metro Manila, including the main business district of Makati City, are enduring ash fall and volcanic particles up to 2.5 inches (64 millimeters) in diameter.

The Philippines is well prepared financially to handle any fallout and damage from this eruption. The government has set aside at least $50 million in emergency fund and can tap catastrophe financing to fund rebuilding, he said.

The Office of Civil Defense in Calabarzon said that it’s been endless evacuation since last night. The government need masks; there volunteers and respondents who are directing rescues and evacuation really need them.

Manila’s international airport, the country’s main gateway, partially opened for departures at 10 a.m. and arrivals at noon, authorities said in a statement. More than 240 flights had been cancelled since Sunday, affecting about 60,000 passengers, according to separate statements from Cebu Air Inc. and Philippine Airlines Inc., before the resumption of flights. The Bank of the Philippine Islands, the nation’s oldest lender, suspended operations in “badly affected areas,” mostly in Batangas and Cavite and allowed some staff in less-affected areas to work remotely, according to Owen Cammayo, vice president of corporate communications. Security Bank Corp. said it shut its branches in Metro Manila, central and southern Luzon on Monday.

Ayala Land Inc. said its 2 malls near Taal volcano are closed Monday for safety checks and clearing works. SM Prime Holdings Inc., the largest Philippine shopping mall operator, shut its 25,000 square meter mall in Lemery, a town in Batangas. About 23,700 evacuees from more than a dozen towns have been moved to evacuation centers in the provinces of Batangas and Cavite. Hundreds of thousands more may need to be evacuated if eruptions in the main crater cause surrounding craters to explode.

Taal is considered the second-most active volcano in the Philippines. Located in the middle of a lake less than 10 kilometers inland of Balayan Bay on the island of Luzon, Taal Volcano has some 30 active craters, according to Batangas province Vice Governor Mark Leviste.