More than 100,000 Italians have been caught defying country’s lockdown 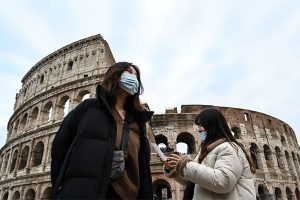 Italian government has made stringent rule to control coroanvirus spreading throughout the country. The grocery stores, pharmacies, postal offices, and banks remain open, while everything else must close for two weeks which has already started from yesterday. The movement between Italian cities for reasons other than work and health is forbidden.

It’s yet another attempt to stop a virus that has so far infected almost 64,000 people here, and killed more people than in any other country in the world. Giuseppe Conte, the prime minister, told that everyone’s efforts are needed, the survival of the social and economic fabric of their country is at stake.

Italy’s 60 million citizens can only leave their houses for a handful of reasons—to go to the supermarket or the pharmacy, for instance—and need to carry a document stating why they are outside, where they are coming from, and where they are going. If caught breaking the rules, they can be fined about €200 ($215).

Instead of the more gradualist approach implemented by the US and, until Monday (March 23), by the UK, Italy has copied China, imposing strict limits on movement and gatherings as soon as cases started to spike. Both lines of action have been criticized, either for being too lax or too severe.

This weekend, Italy saw some early signs that its approach is working. The number of new infections and fatalities dropped on Sunday (March 22), and again on Monday, indicating that even if numbers are still growing, it is at a slower pace than before.

Silvio Brusaferro, the head of the national health institute, told Reuters that it’s still too early to say if cases will continue to drop, and that the current retreat might be a consequence of less testing. Authorities don’t want to celebrate too early and send a message to the population that things are fine. People still need to stay inside.

Most Italians are respecting the drastic containment measures. Many are now entering their second or third week of complete isolation, leaving their homes only to buy food.