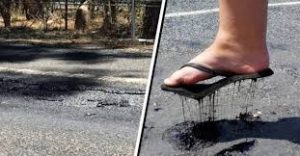 Unprecedented heat scorches Australia, Chile and Argentina. According to the Australian Broadcasting Corporation and the Capital Weather Gang, the heat was so intense it caused bats to fall from trees and snakes to seek refuge in people’s toilets. There are sparking wildfires and exacerbating droughts.

The Australian Bureau of Meteorology reported that it was the hottest January in Australia ever recorded. The heat waves are ‘unprecedented in their scale and duration.’

One remarkable record was set in Port Augusta, Australia, which soared to 121 degrees. That’s the hottest temperature ever recorded at a coastal location in the Southern Hemisphere, as per Weather Underground.

Late in the month, folks in Wanaaring endured Australia’s all-time hottest night, when the overnight temperature only dropped to a sweltering 97.9 degrees.The heat in Chile sparked a number of wildfires this week. The fires have killed two people and burned thousands of acres, AFP reported.

Across the Pacific, at the far southern tip South America, the tiny town of Porvenir, Chile, soared to 90.5 degrees earlier this week. This may have been the Earth’s most southerly 90-degree temperature on record.