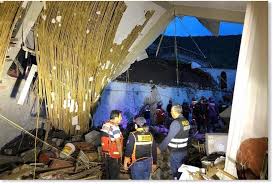 A landslide ripped into Alhambra hotel during a wedding celebration in southeastern Peru, killing at least 15 people. The hotel was built very close to a hillside. The mudslide brought the hotel roof down on the partygoers and the retaining wall collapsed.

Guido Chahuaylla, the mayor of the city of Abancay said that the mudslide broke through the walls of the hotel, crashing through. Every effort was made to ensure that rescuers were able to reach those trapped in the rubble. The wounded were been taken to a local hospital.

About 100 guests had been invited to the wedding party and 15 were dead and 34 injured. As per Civil defense chief General Jorge Chavez, the dead were 11 women and four men. Some 50 people were believed to have been close to one of the walls that collapsed.

The bride and groom, Benedicta Palomino and Bladimir Marquez, were in stable condition.

The firefighters, police and residents worked through the night to rescue people as they are still trapped under rubble, mud and rocks.

The wall that collapsed into the building was built to protect it from mud and rocks. However, it itself became the cause of fatalities.