15 killed and dozens missing after massive landslide in Philippines’ Cebu 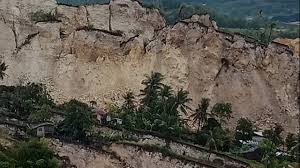 A massive landslide buried dozens of homes near a central Philippine mountain region Thursday, killing at least 15 people and sending rescuers scrambling to find survivors after some sent text messages pleading for help.

This new landslide surged down on about 30 houses in two rural villages after daybreak in Naga city in Cebu province, Roderick Gonzales, the city police chief said. Seven injured villagers were rescued from the huge mound of earth and debris.

Some victims still managed to send text messages after the landslide hit, Gonzales said, adding elderly women and a child were among the dead.

The landslide hit while several northern Philippine provinces were still dealing with deaths and widespread damage wrought by Typhoon Mangkhut, which pummeled the agricultural region Saturday and left at least 88 people dead and more than 60 missing.

A massive search was still underway for dozens of people feared dead after landslides in the gold-mining town of Itogon in the north.

The Cebu province was not directly hit by Typhoon Mangkhut but the massive typhoon helped intensify monsoon rains across a large part of the archipelago, including the central region, where Naga city lies about 570 kilometers (353 miles) southeast of Manila.

The rescuers there were treading carefully in small groups on the unstable ground to avoid further casualties.

There are more than 300 villagers were evacuated for safety as search and rescue work continued, Templo said.  Naga is a coastal city with a population of more than 100,000. The rescuers at the site of a landslide on the resort island of Cebu in the Philippines can hear shouting from beneath the rubble as they attempt to shift debris covering more than 20 homes, officials say.

Philippines Red Cross CEO Richard Gordon posted on Twitter that the organisation had responded to the deadly collapse in the early hours of Thursday. The incident comes just days after another deadly landslide in the mining town of Itogon, in the Cordillera region in the north of Luzon, killed at least 18 people. The rockfall destroyed hundreds of homes and buried dozens of people, mostly miners who worked in small-scale mines and their families.

That landslide, which was triggered by heavy rains brought by Typhoon Mangkhut — known locally as Ompong — occurred Saturday. Mangkhut, the strongest storm of 2018, left 63 people dead, 42 injured and dozens missing as it cut a destructive streak across Luzon, the most populous island in the Philippines.