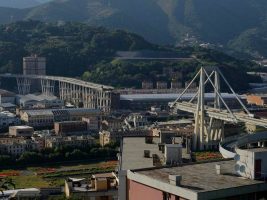 A suspension bridge over the Tarn River in France collapsed today leaving a 15-year-old girl dead and several injured.

The 15-year-old was in a car with her mother when the bridge collapsed.

The bridge adjoins the towns of Mirepoix-sur-Tarn and Bessieres, around 30 kilometres (18 miles) north of the city of Toulouse in France.

Several people are said to be missing after a truck and a car plunged into the river below, as per the authorities.

Two people are also in a life-threatening condition.

More than 60 emergency workers were present at the scene this morning when the incident occurred.  An investigation has been launched, according to the head of the Haute-Garonne department Georges Meric.

At least nine people have suffered injuries and three helicopters were called to the scene alongside emergency service first responders.

Four people who fell into the river somehow saved their lives as they were able to make their way to the shores.

The bridge happens to be a popular tourist attraction of France and is said to have collapsed at roughly 8 am local time.

The 150m-long suspension bridge can bear weight up to some limit.

The last annual check on the bridge was done in the last year. It showed that there was no structural problem in the bridge.

Inspections are also carried out every six years with the last one conducted in 2017.