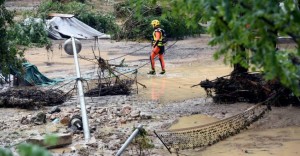 The helicopter rescuers have evacuated around 1,600 people including 350 Dutch tourists from Gard campsites after heavy downpour triggered flash flooding in southern France. Around 17,000 homes in the southwest and northeast were without power.

Several parts of central and southeast France were on flood alert after a blazing heat wave ended abruptly in disastrous thunderstorms on Thursday.  After heatwave mudslides and mud eruption create a havoc.

One person was reported missing after the swollen Ceze and L’Ardeche rivers broke their banks in the northern part of the Gard region.  The missing person is a 70-year-old German man who is feared to have been swept away by floodwaters while inside his caravan. The nearby areas, all part of the verdant and mountainous Cevennes were also hit with massive flooding. More than 400 firefighters and police officers, many sent in from other areas, were involved in the operations.

Thierry Dousset, the top aide in the Gard administration, said no one knew for certain whether the man was in his van when it was apparently swept away.  The rescue officials said that 119 children in Saint-Julien-de-Peyrolas were sent to an emergency shelter.

The Gard administration said four German children were sent to hospital in Bagnols-sur-Ceze, a town on the Ceze River, for hypothermia. They were among 10 people hospitalised with minor injuries.

The mayor of Bagnols, Jean-Yves Chapelet, said many Dutch tourists were among the 350 campers evacuated in the town. There are hundreds of firefighters, many sent in from other regions, helped in the evacuations, using helicopters to spot camp sites and occasionally to perform rescues. The high road connections in the area remained cut off as night fell.