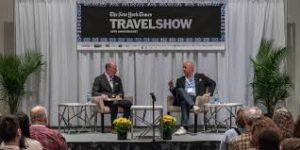 An exhibition showcasing China’s tourist and cultural attractions were among the highlights of the 16th New York Times Travel Show held at the Jacob K. Javits Center in Manhattan. It came to an end yesterday.

Organized by the Ministry of Culture and Tourism of China, the exhibition captivated thousands of visitors with distinctive Chinese cultural elements familiar to local Americans, which included huge posters of giant pandas and Spring Festival decorations surrounding the booth.

Demonstrations of calligraphy-writing and Tai Ji-practicing also featured through the three-day event, which have attracted visitors to join and experience the essence of traditional Chinese culture.

The New York Times Travel Show is the largest of its kind in North America. This year’s show has seen over 550 exhibitors and more than 30,000 professional attendees from around the world.