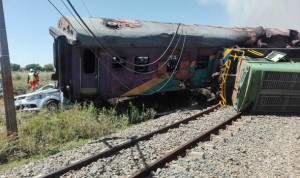 At least 18 people were killed and more than 250 were injured when a train collided with a truck in South Africa.

The train was travelling from Port Elizabeth to Johannesburg when the collision occurred, causing a fire to break out in one of the carriages and then spread to others.

Mthura Swartz of the Passenger Rail Agency of South Africa (PRASA) said that the 18 people were confirmed dead and 254 were injured, out of which some were the tourists.

The train had capacity for 780 passengers and there were 758 on board. Most of the deaths were the result of the fire that spread through the rain.

The rescue workers are seen at the site of a train crash between Hennenman and Kroonstad.

The death toll was predictable to rise as rescuers put out small fires that continued to burn in some of the carriages.

The emergency services are still working on freeing people from overturned carriages.

The train was between Hennenman and Kroonstad in the Free State province when the collision occurred.

The provincial fire and medical services who were the first to arrive on scene found several carriages lying on their side. The paramedical personals evacuated the train and assessed passengers’ injuries while firefighters battled the blaze.