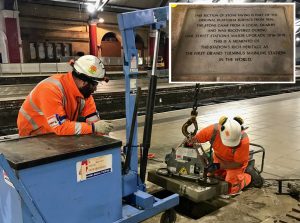 Three stone slabs which formed part of the original 1836 platform surface at Liverpool Lime Street have been put back on display as part of the station’s multi-million-pound transformation.

The 19th century Yorkstone, which originally came from a local quarry more than 180 years ago, was recovered during Lime Street’s £140m upgrade between 2016 and 2018.

The two-year station overhaul, carried out as part of the Great North Rail Project, has seen upgrades to track, platforms and signalling to boost capacity within the historic grade-II listed station.

Platforms at Lime Street have been reconfigured and extended, and a new state-of-the-art signalling system has also been installed to enable more frequent, reliable and longer trains.

While those 21st century improvements were taking place, the 19th century Yorkstone slabs were kept in safe storage before they too were brought up to date.

All three slabs have now been installed on platforms 1, 3 and 5, and engraved with a message to explain their special significance to passengers. The message reads:

‘This section of stone paving is part of the original platform surface from 1836. The stone came from a local quarry and was recovered during Lime Street station’s major upgrade 2016 – 2018. This is a memento of the station’s rich heritage as the first grand terminus mainline station in the world.’

Sean Hyland, senior programme manager at Network Rail, said: “During Lime Street station’s major transformation, we completed a lot of work to remodel the station platforms, which uncovered the historic Yorkstone beneath.

“As part of the Great North Rail Project we are transforming train travel for passengers across the north, including Lime Street station’s major upgrade which was completed last October.

“At the same time, we must never forget our railway’s rich history. Displaying the 1836 Yorkstone from the station’s original platforms is a small reminder of the station’s rich heritage.”

Steve Rotheram, Metro Mayor of the Liverpool City Region, said: “Even as the station has been brought into the 21st century, it’s important to remember its historical importance, and its place at the forefront of the technological revolution wrought by the coming of the railways, so I’m very pleased to see these slabs installed to commemorate that history.”