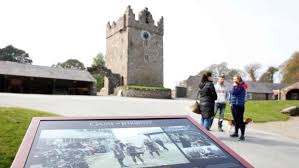 In 2018, record numbers of Game of Thrones enthusiasts travelled from different countries to Northern Ireland to visit their much loved locations from the hit TV show, comprising the Haunted Forest and the Kingsroad, and spent an unprecedented £50 million (€58 million) in the North, as per recent estimates suggest.

Latest industry statistics from Tourism NI, show one in every six out-of-state visitors were motivated to travel to the North in 2018 due to the Game of Thrones.

Enthusiasts came from different countries like India, North America, China, and Australia and from all over Europe to witness where some of the epic battles and nerve-racking scenes from HBO’s most-watched series were filmed.

Recent estimates say that last year, the total number of overseas Game of Thrones fans who travelled to the North hit a high of 350,000 visitors.

John McGrillen, chief executive of Tourism NI, said Game of Thrones had dramatically “changed the perception of Northern Ireland” as a tourist destination.

From Game of Thrones, there are at least 26 filming location that fans can discover in the North, and over 23 visitor experiences have been developed in these locations, starting right from coach tours and specialist tour services to Game of Thrones-inspired food experiences.

The final season of Game of Thrones is at present airing, and Mr. McGrillen hopes the show to continue to be a tourist hit for the North well into the future.

“We’re going to have a permanent attraction in Northern Ireland for fans with the Game of Thrones legacy experiences. The first attraction – the Game of Thrones studio tour – is due to open in spring 2020 at the Linen Mill Studios in Banbridge, [Co Down], and this new 110,000sq ft interactive experience will give fans the opportunity to see behind the scenes how the series is made and feature many of the original props and costumes and sets from the series, which is going to be very exciting,” he added.