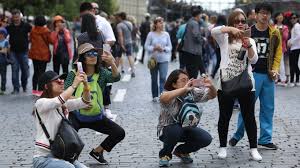 In 2019, tourist arrivals to Russia have increased by almost 20.5%, as per the official figures presented on Monday by the Association of Tour Operators of Russia (ATOR)

In January-December 2019, over 5 million tourists visited Russia, as per ATOR’s breakdown of Federal Security Service (FSB) border service data, a rise from 4.2 million tourists the year before. The numbers come as Russia moves to make visa requirements hassle-free for citizens of about 53 countries in 2020 and enhance its tourism revenue.

Country-specific data showed an upswing in tourist arrivals in Russia from all the major continents except Latin America. Since 2018, the top five countries where tourists came from remained unaltered.

China provided the largest share of inbound visitors with almost 1.5 million tourists. This was an increase of 19% from 2018. For Chinese tour groups, Russia have set in visa-free travel and employed Chinese-speaking staff at the airports and train stations to house the surge.

Israel rounded out the top five with 199,000 inbound tourists, an increase of 21.7% in a year. On a whole, around 33 million foreigners went to Russia, not only for tourism.