By 2024, railways to run 100 percent on electricity, says Piyush Goyal 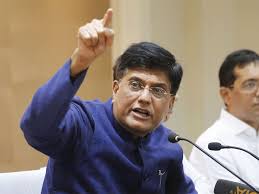 On Monday, the Commerce and industry, and railways minister, Mr. Piyush Goyal explained that the entire network related to the Indian Railways will operate electrically by 2024 and become a net-zero emission network by 2030.

“By 2030, we plan to make the entire railway network a net-zero e mission network. We will have no emission from the railways, it will run on clean energy and clean power,” he said, and added further that it will be world’s first railways to run completely on electricity.

“We are very conscious of our responsibility to the environment. We are embarking on rapid electrification of our rail network.”

Also, the minister mentioned that India will be keen on partnering with Brazil on a rapid engagement in terms of the railways and expected that investments will grow simultaneously in the sectors of clean energy, startups, railways and create value chains between India and Brazil where goods may be semi accumulated in one country and finished in another.

The minister also stated that both the countries have developed a target to take bilateral trade by 2022 to $15 billion, from the current $8.3 billion.

He has urged the Indian industry to provide fresh nominations of people who are interested in getting engaged with the South American country.

While discussing about business opportunities in both countries, he said businesses of both sides can look at the possible areas like railways, infrastructure, tourism, agriculture, clean energy and startups.

While commenting on Brazil President, Jair Bolsonaro’s declaration on visa-free travel between the two countries, Goyal said visitors for business and tourism will profit from this.