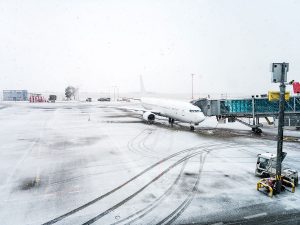 Owing to mix of snow, sleet and heavy rain, more than 2,320 flights has been cancelled and about 6,375 delayed as of 7:35 p.m. ET, as per flight-tracking service FlightAware. Powerful storm is roaring through America impacting 200 million Americans and 39 of the 48 contiguous United States.

Several airlines such as Delta Air Lines, United Airlines, JetBlue Airways and Spirit Airlines said they would waive date-change fees for travelers scheduled to fly to or from airports affected by the storm if they can travel later this week.

Three major airports serving Washington and Baltimore, are hardest-hit airports where several inches of snow were expected before a switchover to ice and eventually rain.

At Washington Reagan National, nearly 370 combined arrivals and departures were cancelled as of 7:35 p.m. ET, – more than a third of the day’s entire schedule there. At Philadelphia, more than 15 percent of the day’s flights had been canceled.

The rate of snowfall is the challenge.

Wednesday proved to be a tough day for air travel as a sprawling winter storm brought ice and snow to airports from the Great Plains into the Northeast.