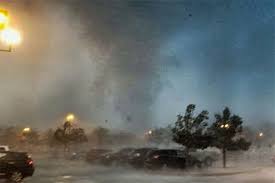 The National Weather Service in Mount Holly has confirmed that three tornadoes touched town in New Jersey as more severe weather is expected to hit the region. One tornado damaged solar panels and injured a woman.

The National Weather Service, Mount Holly has issued a statewide hazardous weather outlook, saying a storm system was expected to move through the region on Tuesday and Wednesday. Storms will be capable of producing severe weather and heavy rainfall that could lead to localized flooding, according to the NWS.

The storm possibility comes on the heels of severe weather that flooded roads, knocked out power to more than 19,000 people and brought high winds to New Jersey last Wednesday.

The three tornadoes touched down at 4:33 p.m. on Wednesday, packing wind speeds of 75 mph. The weak tornado briefly touched down on the property of Voorhees Greenhouse in Hightstown. The tornado began near Sharon Road, where several trees and branches were downed, according to the National Weather Service in New Jersey.

The most significant damage observed was to a greenhouse, whose glass roof was shattered. Shards of glass were blown for hundreds of yards, with many shards also piercing clean through the doors and walls of a nearby barn. A few metal support beams from the greenhouse were also tossed up to 200 yards from their original position, with a number of loose outdoor objects tossed about in a chaotic, yet circular manner often consistent with tornado winds. The eyewitnesses working at the time reported seeing circulating winds and a possible condensation funnel as damage to the greenhouse was occurring.

The tornado then passed over a barn, scattering shards of glass, flower planters and support beams. Many of these objects were deposited on the other side of the barn into a nearby field. There are several trees sustained damage to limbs and branches, but all were left upright. The tornado dissipated as it moved into a clearing beyond the wooded area.

One woman received a minor cut from flying glass, but no serious injuries occurred as a result of this tornado.

The tornado touched down at 6:40 p.m., packing wind speeds of 70 mph. The weak tornado briefly touched down in a field of solar panels adjacent to the Millville City Sewer Department facility, according to the NWS.

Several rows of solar panels sustained damage either from the tornado or from the falling debris of other panels, with a couple rows of panels largely destroyed, according to the NWS. The tornado continued into a wooded area next to the solar panels, snapping at least one tree and damaging a couple others, but lifting soon after it entered the wooded area.

A twisting pattern observed in the damage to the solar panels was sufficient to determine that the damage was caused by a tornado. In addition, an eyewitness looking in the direction of the damage from near the nearby Millville Executive Airport reported a possible funnel cloud sighting as the storm passed the area.

The National Weather Service also confirmed with Union County Emergency Management that a brief tornado touched down near Springfield Avenue and Route 22 in Springfield. Radar-estimated winds were 70 mph.