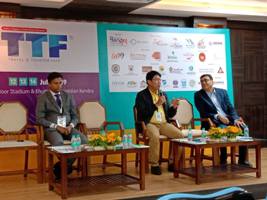 Travel and Tourism Fair (TTF), the oldest and one of the biggest travel trade show networks in India today kick the 30th edition of TTF Kolkata. TTF Kolkata is being held from 12th to 14th July, 2019 at the Netaji Indoor Stadium and Khudiram Anushilan Kendra with 440 exhibitors, including the pavilions of various national tourism boards and state tourism boards. The particpants from 14 countries and 25 Indian states are joining the show this year.

Sri Lanka, Bangladesh and Nepal are taking part as the Partner Counbtries while Thailand and Baharin have joined as Feature Countries. Other countries being represented in TTF Kolkata include Bhutan, China, Malaysia, Nepal, Singapore, South Africa and UAE. India Tourism will also have a prominent presence at the show.

Among Indian states, West Bengal and Uttarakhand have the largest pavilions, followed by Odisha, Gujarat, Kerala, Madhya Pradesh, Tamil Nadu, Himachal Pradesh, Assam, Jharkhand and many other states in India. They have also set up state pavilions, to attract tourists to their states.

This year, TTF Kolkata will be for the for the first time hosting TTF Forum. A knowledge sharing platform, TTF Forum at Kolkata will witness a panel discussion on Exploring Travel & Tourism Opportunities Beyond Eastern India: How Bangladesh Outnumbered European Travellers to India.   This panel will have speakers from prominent destination management companies from Bangladesh.

TTF Kolkata has always been a must visit event not only for the travel trade and tourists from Kolkata but also the neighbouring country of Bangladesh. Bangladesh topped FTA’s in 2017 with a footfall of 2156557 tourists. On the other hand, Bangladesh also receives a majority of international tourists from India. No wonder, Bangladesh is participating at the show with a large delegation.