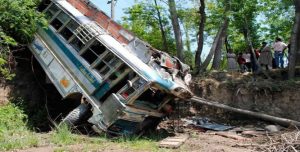 At least 35 people have been killed and 22 left injured after a small bus rolled down from mountainous road and fell into cavernous gorge in North Indian state of Jammu and Kashmir’s Kishtwar district on Monday.

Of those injured, three have been airlifted to Jammu, according to latest reports said. Another helicopter has flown to Kishtwar to airlift more of the injured. Earlier, police officials had said that 24 people have been killed in the accident. The rescue operation is underway, according to the official.

Overloading, over-speeding and bad roads have led to tragic accidents in the hills of Doda, Kishtwar, Rajouri and Poonch districts in the past as well.

On June 27, 11 students of a private computer training institute died after their mini bus fell into a gorge in Pir Ki Gali area of the Mughal Road that connects the Rajouri-Poonch districts in the Jammu division.

Following this bus accident, the authorities in Poonch district have banned all excursions by educational institutions unless specifically allowed by the district administration.