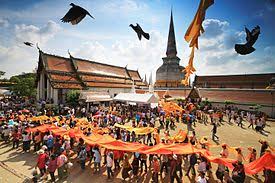 Thailand’s tourism body unveiled that the international tourist arrivals rose 8.8 percent in 2017 to a record 35.38 million, equivalent to half of Thailand’s population.

The Ministry of Sports and Tourism announced that in 2017 Thailand saw the tourism revenue of more than 1.8 trillion baht (56 billion U.S. dollars) a rise of nearly 12 percent from that of 2016.
Pongpanu Svetarundra, government tourism and sports official said that Thai tourism was largely contributed by the Chinese tourist with more than 9.8 million visitors generating about 524.4 billion baht (16.3 billion U.S.dollars) to the country.
The amount of Chinese tourists has risen 11.97 percent and there is a jump of more than 15 percent in terms of their spending compared to the same period of 2016 as per the data shown by the ministry.

International tourist arrivals to Thailand Malaysia ranked second with an amount of more than 3.3 million, followed by South Korea with about 1.7 million visitors to the Kingdom.
It was anticipated by Kasikorn research center, a Thai think tank, that the number of international tourists in 2018 to reach 37.64 million-37.99 million, up 6.5-7.5 percent from an expected growth of 8.7 percent in 2017.

The inbound tourism activities in 2018 would generate approximately 2.01 trillion baht(62.5 billion U.S. dollars) in revenue, rising 10.4 percent versus an estimated growth of 11.7 percent in 2017.

The tourism trend in 2018 will be driven externally by an international trend to link information and communication technology with hospitality business.

The government agencies are gearing up various marketing activities like theTourism Authority of Thailand’s “Thainess” campaign, Sport Tourism and the promotion of culinary experiences.