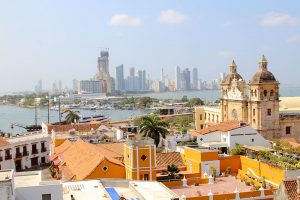 Four Seasons Hotels & Resorts has announced that it will open a luxury hotel and private residences in Cartagena, one of South America’s most historic and attractive seaside cities.

Four Seasons Hotel & Private Residences Cartagena will be located on the doorstep of Cartagena’s historic walled city which is a UNESCO World Heritage site. It will revitalize and restore several culturally significant buildings and take one back to the 16th century.

Through careful restoration these will be brought to life once again and the iconic facades and historic architecture will be preserved.

Guests and residents can gain  convenient access to Cartagena’s vibrant culture and entertainment scene and its picture-perfect architectural landmarks. The hotel will be nestled within the lively Getsemaní neighbourhood.

Carlos Arturo Londoño, president, Valorem said that they were  proud to partner with the iconic Four Seasons brand to build a new luxury hotel and private residences in the vibrant city of Cartagena.

The newly restored hotel and private residences will be the most sought-after destination to live and visit and will transform the hospitality landscape in Cartagena.